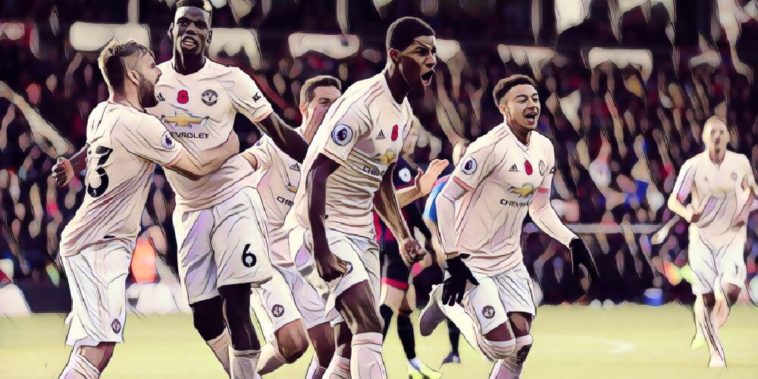 In an entertaining fixture, Manchester United came from behind to edge out Bournemouth courtesy of an injury time winner from Marcus Rashford.

The early kickoff this weekend gave us a seesaw contest from the off. Bournemouth started with purpose and vigour, with Ryan Fraser forcing an early save from David de Gea. Manchester United fell behind in the 11th minute as Junior Stanislas drove in a cross after a half-cleared corner, and Callum Wilson stabbed it home.

While United were outplayed for most of the first half, they did manage to draw level through the in-form Anthony Martial in the 35th minute. The second half saw United force Bournemouth onto the back foot, but they missed chance after chance, including a stunning miss from substitute Marcus Rashford, which left Mourinho wringing his hands in disbelief. However, when Rashford was presented with a similar chance in added time, he made no mistake, breaking the Cherries’ hearts and sending the travelling fans home happy.

Teams must hate playing against Herrera

With the game level midway through the second half, Mourinho turned to Rashford and Ander Herrera to change the contest. Herrera’s presence allowed Paul Pogba to push further forward and get into positions like the one from which he assisted the game-winner, while Herrera brought his constant harassing energy and bite.

Opposing teams must hate playing against the Basque midfielder. He is sharp in his tackling, and not averse to leaving his studs in when he has to. Blessed with excellent footballing intelligence, it might be time to give Herrera an extended run in a starting role.

He may have been outdone by Pogba’s cross for the winner, but until that point, Nathan Ake had been excellent. The Dutchman may be short for a centre-back, standing at 5’11”, but his reading of the game has been top-class this season.

The highlight of this match for him was his point-blank block of Rashford’s shot from six yards out, denying a certain goal. For large parts of the game he outmuscled forwards, and cut out passes, and he looks like he is building on his successful loan spell, which led to his permanent transfer. He is surely knocking on the door of the Netherlands’ starting lineup, despite competition from the likes of Matthias de Ligt and Virgil van Dijk.

Two games without Romelu Lukaku in the starting lineup have seen two games with plenty of attacking cohesion from United. They may have been let down by their finishing, but with their Belgian frontman in the midst of a goal drought, it is arguable whether he would have helped with that anyway.

The movement of the United attack appears to be opening up more space and allowing Pogba to get into the game. Lukaku has looked shattered so far, and the rest may do him a world of good. Even when he does return, it might be in United’s best interest to see where this good run of attacking form takes them.

Speaking of good attacking form, Callum Wilson has been immense for Bournemouth this year. After scoring eight goals in 28 games last year, he has caught fire scoring six and assisting another four in the opening 11 fixtures this season. This represents a huge turnaround for Wilson, who missed a combined year of football due to ACL injuries in both his knees.

His form, along with that of players like Ryan Fraser and David Brooks, has propelled Bournemouth to new heights this season. Wilson, still only 26, has to be knocking on the door of the England squad, and if he maintains this form, there is no way Gareth Southgate can leave him out.

A challenging week ahead for United

This game was the first of three consecutive away fixtures for United. Bournemouth, with their flying start to the season and vociferous home support, was always going to be a tricky fixture but the challenge pales in comparison to what awaits Mourinho’s side.

First comes a trip to Turin to take on Juventus, after the Serie A side eased to a 1-0 victory at Old Trafford a couple of weeks ago. Next weekend, there is the Manchester derby against a Man City side who are yet to lose this season. This week will be one of the toughest of United’s season, and the mood around the club will depend on their performances in these away games.