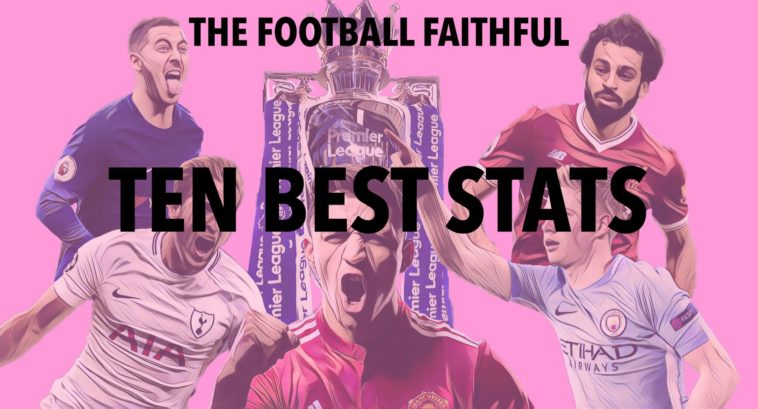 Its been another intriguing weekend of Premier League football, with three of the top six dropping points, Brendan Rodgers losing on his managerial debut at Leicester, and only two of the bottom eight sides getting anything out of their respective games.

Here are 10 of the best stats from the weekend.

Spurs and Arsenal played out a 1-1 draw at Wembley on Saturday, and while it was only a short trip across London for Unai Emery’s side, it’s safe to say that Gunners’ defence doesn’t travel well…

0 – Arsenal are the only side yet to register an away clean sheet in the Premier League this season. Vulnerable. #TOTARS pic.twitter.com/fwfo2hGF7t

Fulham’s defeat to Chelsea won’t have come as a surprise to many considering the two side’s league positions. While the Cottagers have been pretty pants against most teams this season, it seems as though they particularly don’t like playing other teams from London.

Fulham 1-2 Chelsea FT: Fulham are the first side in top-flight history to lose 10 London derbies in the same season https://t.co/vmwaiJsTTg #FULCHE pic.twitter.com/rhnOR5kouc

Mo Salah is officially in his worst goalscoring drought for Liverpool…although it probably says more about how good the Egyptian has been so far.

Mohamed Salah has failed to score in three consecutive Premier League games for the first time since joining Liverpool:

He had his fair share of chances today… pic.twitter.com/GDq7LveohK

One man who does know where the net is at the moment is Romelu Lukaku, with the Manchester United striker netting four goals in his last two appearances, including three with his unfavoured right foot – including this one…

⚽ Romelu Lukaku scored his 1st PL goal from outside the box in 92 appearances, since for Everton against Crystal Palace in September 2016 pic.twitter.com/LYAW4qQ4OV

Jamie Vardy may well have been having a party when Claude Puel departed the King Power last week. Not only because he has publicly said he wasn’t a fan on the Frenchman’s style, but because he could continue this fine goalscoring record…

However, Brendan Rodgers would have been hoping to break his particular disappointing record, with the Leicester boss seeming to be a bit of a slow burner when he takes over at a new club in England…

Brendan Rodgers has failed to win his first league game in charge of each English club he has managed:

Aaron Wan-Bissaka is the first player in Europe's top five leagues to make 100+ tackles this season.

Still only *seven* players have successfully dribbled past him. ? pic.twitter.com/kJyNoXiBFM

Bournemouth have been on the end of a few hidings of late, and with Man City coming to town at the weekend, it’s no surprise to see Eddie Howe try to shut up shop at the back, although their attacking threat was severely blunted.

Bournemouth are the first home team not to have a single shot in a Premier League game since records began.

Liverpool missed the chance to maintain their place at the top of the table though after being held to a 0-0 draw by Everton in what was the 200th Merseyside Derby. However, the scoreline probably shouldn’t have come as a great surprise…

34 – This was the 34th goalless draw between Everton and Liverpool in English league football – 15 more nil-nils than any other fixture in the history of the Football League. Anticlimax. pic.twitter.com/sE4D74thYe

Despite their topsy turvy season under Marco Silva, it seemed like Everton were absolutely determined not to help Liverpool’s title chances.

Everton: Made three last man tackles against Liverpool, a record in a Premier League match this season.

No team had recorded more than one in a game prior to today's Merseyside derby https://t.co/tfnE1NCikV pic.twitter.com/4qeMFTbnLE