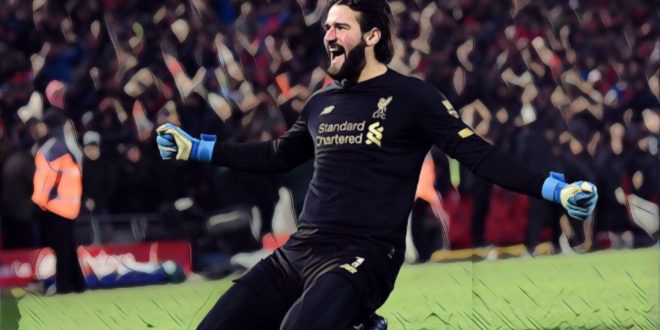 Ste McGovern 27/01/2020 Five of the Best, Opinion/Features Leave a comment

It’s one of those rare but delightful sights in football: the goalkeeper setting up a goal.

The Brazilian netminder was able to catch Manchester United on the break late on in their most recent meeting, swiftly kicking the ball long to Mo Salah, who had only Daniel James and David De Gea to contend with. There was only ever going to be one outcome, as the Egyptian killed off the Red Devils with the second goal of the match.

Alisson managed to create one of the club’s moments of the season, not just with his quick-thinking and accuracy, but with his sensational celebration with Salah, somehow managing to be the first man to reach the goalscorer, and executing a perfect knee slide. That’s how you know he’s a world-class operator.

There have been some spectacular goals that have been assisted by Premier League goalies over the years, some of which are not remembered for the assist, but then again isn’t that most goals? We’ve unearthed some of the greatest that just so happened to be set up by the unlikeliest source.

Five of the best Premier League goals assisted by goalkeepers:

This goal is brilliant on a number of levels. Firstly, the footwork and finishing from Sergio Aguero is phenomenal, as you’d expect from one of the Premier League‘s greatest ever strikers. Secondly, it illustrates Ederson’s exceptional distribution, bypassing the entire opposition to set Aguero free.

Lastly, and most impressively, it shows the goalkeepers intimate knowledge of the game’s laws, as Aguero was in an offside position, but little did many of us know that you cannot, in fact, be offside from a kick out. Everyday is a school day.

📅 #OnThisDay last year, Ederson recorded one of the finest Premier League assists in 6-1 win against Huddersfield. 🔥

Remember Albert Riera? Yeah, neither do we, but he scored an absolute cracker 11 years ago in Liverpool’s 5-0 demolition of Aston Villa at Anfield.

The match is probably best remembered for Steven Gerrard’s first hat-trick for the Reds, but it should be noted for Pepe Reina’s perfect long ball to Riera, who volleyed the ball in off the crossbar for the game’s second goal.

And then we never heard of him again.

Papiss Cisse’s time at Newcastle United was a bit of a mixed bag, mixing the superlative with the dogshit, but he did at least leave us with a couple of worldies while on Tyneside.

Arguably the most memorable came in 2013 when Rob Elliott hit a long diagonal from a free-kick in his own half, which Luke Shaw completely missed when he threw his head at it, and found Cisse instead, who decided to just unload on the Southampton goal from about 30 yards out.

Papiss Cisse scored this beauty when Newcastle met Southampton in 2013!

That same season Cisse was on the receiving end of another goalkeeper assist, only this time it was Tim Krul who kicked a long ball forward for the Senegalese striker to head home against Everton.

This wasn’t the only time David Seaman assisted Ian Wright for one of his many Arsenal goals, but it’s certainly the most impressive, particularly on the striker’s end.

The Gunners goalie takes the direct, finding Wright who turns his defender one way then the other, before delicately lobbing the Everton netminder.

What a goal this was! Ian Wright teases the Everton defence before a delicate finish ⚽️🔴 #ARSEVEpic.twitter.com/KRnrUuVEKJ

We’re over two years on from this goal and Huddersfield Town are struggling in the lower reaches of the second tier, Laurent Depoitre is back in Belgium playing for Gent, and Jonas Lössl is a third-choice backup for Everton with little hope of gametime, while Manchester United are mired in their own set of crises.

Safe to say no one involved is better off now than they were back then, but the Terriers did at least create arguably their most memorable moment during their two year stint in the Premier League by beating United 2-1 at the John Smiths Stadium.

There was nothing particularly complicated about the winning goal, as the goalkeeper simply booted it long, bamboozling the entire United backline for Depoitre to latch onto. The Belgian striker rounded David De Gea and slotted the ball into an empty net.

The finish itself isn’t overly impressive, but it gets extra points for being the goal that caused the minnows to give one of the country’s biggest clubs a mighty shock.