The thrilling pitch of football slots remains an adventure every gambler wants to explore. They have a relatable foundation, banking on the overwhelming popularity of football across the globe. Also, significant payouts are characteristic of these one-armed bandits, thanks to their excellent RTPs and the large pool of participants in progressive rounds. What’s more?

Such slots are introduced to the market regularly, ensuring that enthusiasts can conveniently escape the rot of playing the same games every day. However, this recurring development of new titles poses a double-edged sword, considering that players can often be hard-pressed on the ideal game to select. But this is where we swoop in and save the day with a concise list of the most enjoyable and rewarding soccer slot machines online — that too for only a dollar. 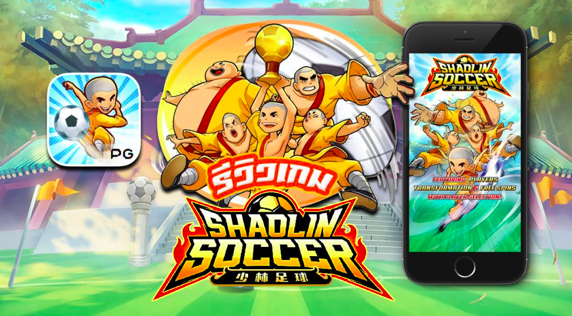 Is there anywhere else better to start than Shaolin Soccer, its boundary-defying fame, and stupefying skill sets? This PG Soft’s adaption of a 2001 Hong Kongese movie of the same title introduces you to a thrilling rendition of immensely competitive gaming. The background is serene, the soundtrack epic, and your move is to take young monks to victory.

When you gather four symbols of a particular player on the third reel, all players on the pitch change into them for a more valuable win. There’s also a free spins (FS) feature, which you can trigger by gathering three scatters on the second, third, and fourth reels. What’s more? You can select the player with your preferred number of multipliers to be the only one present during bonus rounds. 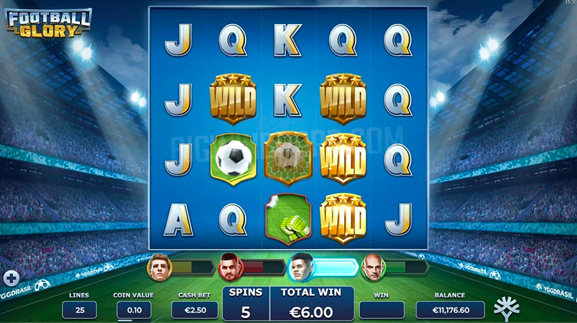 Ever heard of the Special One? Pragmatic coaches have attained a lot in football, and Yggdrasil depicts this efficiently with this less fanciful slot. The graphics may not be this list’s GOAT, but we can vouch for the exceptional features that make up gameplay. Conservative stakers will be glad with the low betting limits and 25 paylines.

Lots of excellent promotions keep you fascinated for long, such as the 21 free spins that fall when you land three or more scatter symbols. Can’t wait to start playing this fun- and feature-filled slot game? Making just $1 deposit at Zodiac Casino gives you an excellent platform to do so! The online casino offers a sign-up package of 80 FS, fair wagering demands, an immersive range of games, and straightforward transaction channels.

Want to go back to the days of stingy, silky players and lawless tackles during street football? Look no further than Waxdan’s Football Mania Deluxe, a simplified slot with absorbing qualities and no-payline bonuses. Yes, you read that right. Scoring a win in the game only takes hitting three adjacent symbols, irrespective of the reels.

You’ll be treated to promos: from a bonus round that awards random prizes per spin to a free spin round, you can trigger with three football symbols. Not to mention the win-boosting minigame that accompanies your win. What’s better? Every fun lover is welcomed to Mania Deluxe due to the extensive betting range and tailorable volatility. 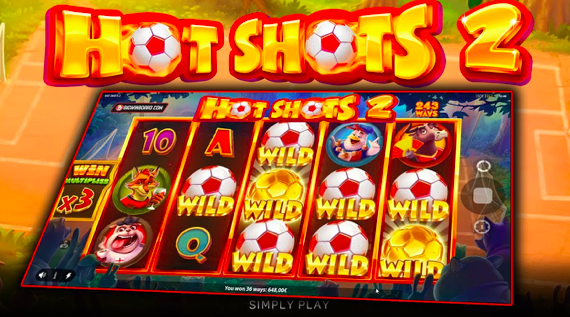 iSoftBet deserves all the plaudits it receives for Hot Shot, its delightfully taken strike at soccer action. The innovative release introduces gamers to animal football players who can’t seem to stop playing. Roll the reels correctly, and you’ll have the whole crowd screaming out like Kop sirens!

And we assure you that you’ll have plenty of chances to do that, thanks to 243 paylines spread across five reels and three rows. Notch three Wilds when they replace symbols on reels 3, 4, and 5 and gain up to twenty bonus spins and a 10x multiplier. Wilds may also expand horizontally and vertically, stretching your rewards. Don’t have much to spare? This isn’t the Super League: you are eligible to participate for as little as $0.25! 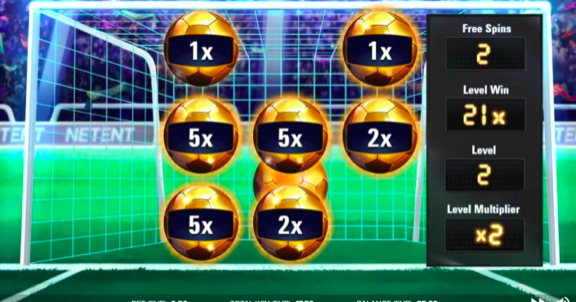 We usher in NetEnt’s simpler-than-normal release that surprisingly turns out to be its best: the 5×3 reeled Super Striker. The volatility can be alternated between medium and high, but you can expect laudable multipliers regardless of where your shot hits. Similarly, landing three footballs triggers 3 free spins.

There are five levels to break through, and each is won when you fill allotted spaces with gold scatters. Also, you can combine the scatter multiplier with the standard multiplier for bigger wins. NetEnt improves the entertainment with the bet slip feature, which allows you to wager on the number of times a symbol will appear in a particular number of wheels. 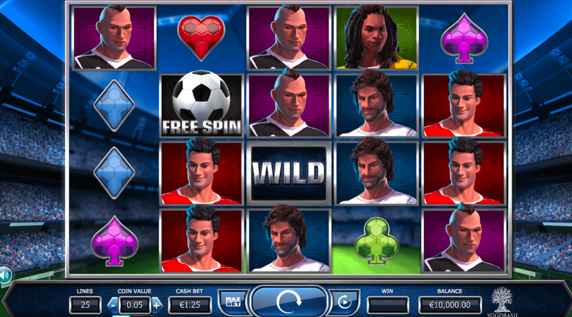 Cementing its immortality among football pokie fans, Yggdrasil makes another appearance with the stylish Bicicleta. In this game, you’ll be treated to mesmeric 3D graphics, captivating sound effects, and fashionable icons. But Bicicleta is more than the riveting action; it’s also highly beneficial with five reels and twenty-five betting lines.

Fanatics can hardly be pleased, but we’re sure scoring up to a thousand coins, and 36 FS can be fulfilling. Eager to get lost in this enchanting football story? Prioritize casinos with these payment methods that many gamers find safe, quick, and affordable. Playing at a site with these options assures that the multitudes of promos in this game can be cashed out if won. 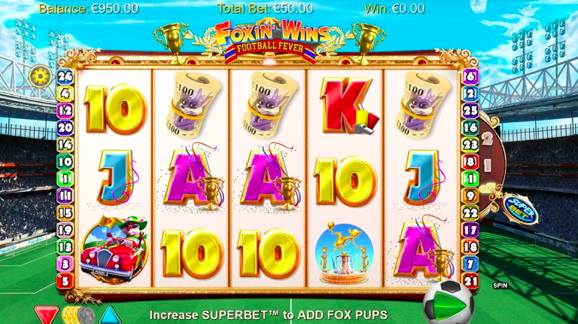 Don’t let Ultras hear you, but the Super League may be a delightful competition if NextGen’s costly-priced Foxin Wins’ is any indication to go by. Low-rollers may squeeze one or two profits out of this game, but Tiki-taka doesn’t start until the expensively assembled bankrolls arrive.

You can enjoy up to three bonus features in the game, starting with the 50x bet multiplier if the fox catches the leprechaun. The second is a unique prize given at random, and the last comes as 10 FS you can re-activate when you hit gold. Overall, we’re sure you’ll be hooked to this game until extra time.

Football slot games rank among the most enjoyable among casino gamblers across the globe. As such, developers and casinos consistently release accordingly themed slot machines, befuddling most gamers on what to select. Fortunately, you can now tell the best of these titles, so you can play soccer slots fully confident in your choices. Before we go, it’s noteworthy that Shaolin Soccer takes the overall trophy here due to its interesting backstory, bonus features, and exclusive multiplier bonuses.