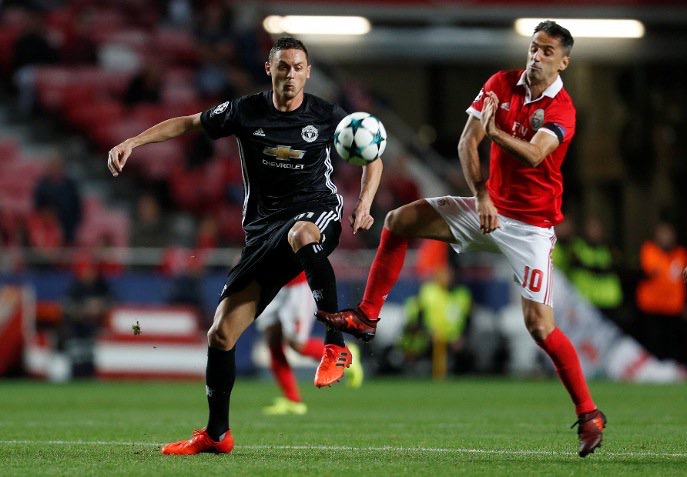 Manchester United maintained their 100% Champions League record this season with a comfortable 1-0 over Portuguese champions Benfica. Here are five key talking points from the game in Lisbon.

After racing to five assists in the Premier League within the first few games, Henrikh Mkhitaryan has seemingly gone missing in the last few games for Manchester United.

The Armenian was largely anonymous in this one once again, struggled to stamp his experience and authority on the game. He struggled to get on the ball, and when he did, he couldn’t find a teammate in Black for United.

Maybe a spell of Mourinho’s tough love towards him may be in order.

What was the Benfica ‘keeper doing?

However, the young Belgian not only got himself in the record books, but got himself into trouble on numerous occasions with his exuberant and unorthodox style.

A string of second half corners from the Red Devils saw Svilar stay routed on his line, despite Rashford pinging the ball straight into the six yard box time after time, even almost scoring directly from the corner.

Then, a few moments later, a free kick, again by Rashford was zipped into the box, over the head of Svilar, who was unable to stop the ball crossing the line – despite his protestations.

A promising ‘keeper, but with much to learn

Shortly after the goal, Marcus Rashford was replaced by Anthony Martial, after the England striker appeared to pick up a knock to the knee. A worrying sight for all Manchester United fans, especially considering the absence of Paul Pogba, Marouane Fellaini, Zlatan Ibrahimovic, Eric Bailly and Marcos Rojo.

Offside more than not

It wasn’t the greatest of games, with United content to sit back and soak up some early Benfica energy and hit them on the break. However, when Manchester United did eventually get hold of the ball, their attacks were frequently broken down easily with their attacking players constantly being offside.

Credit has to go to Benfica for their organisation, but most of the offsides were easily avoidable, with the offender generally being able to look across the line and having the space and time to adjust their run.

Before the recent international break, United were regularly hitting teams for four goals. However, since their return last week, Mourinho’s men haven’t looked as slick or as lethal as they did before it.

The players look a little lethargic and out of sync, with a number of players playing week in, week out since the start of the season. United’s injury list of course doesn’t help this, but the timing of the international break seems to certainly had an adverse affect on United’s momentum. They will be hoping it returns against Huddersfield this weekend.