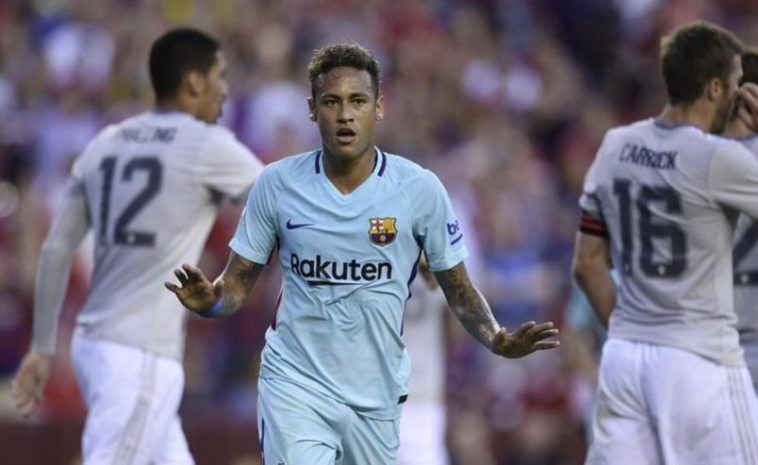 It was the final game of Manchester United’s preseason tour of the USA, and what an interesting and exciting tie it was.

PSG target Neymar scored the only goal of the captivating tie as Barcelona beat the Red Devils 1-0. Here were five things we learned as Barcelona met Man Utd in Washington DC.

Pogba could finally prove his quality this season

In a game against some of the best on the planet, Paul Pogba showed why he should be considered amongst that group. The Frenchman had a high energy display for United, and came close to scoring an absolute screamer in the first half. With a full pre-season under his belt, Pogba could help push United closer towards the top of the Premier League table.

Rashford, Lukaku and Martial should be United’s front three

Anthony Martial joined the action early in the second half, replacing Jesse Lingard who took a knock. However, with confidence seemingly on the up throughout this pre-season tour, the Frenchman looked dangerous. The pace between United’s attacking trio started to cause more problems.

Pereira doesn’t look out of place

He spent the last season on loan at relegated La Liga club Granada, but Andreas Pereira didn’t look out of place in Manchester United’s midfield against the likes of Arda Turan and Andres Iniesta.

Despite not scoring on the tour, Pereira has been one of the players to catch the eye, and should be heavily involved in the upcoming season for United.

Fellaini is a squad player at the very best

He was the first signing of the post Alex Ferguson era, and it is a surprise to most that he has out lasted two managers and is about to embark on his fifth season as a Manchester United player.

However, while he does have his uses and has put in some important performances, Fellaini showed that he really should only be a squad player at best.

With only Pogba, Herrera, Carrick, Fellaini and Pereira as Mourinho’s midfield options, it only highlights United’s need to make additions to the squad in the middle of the park.

United are still behind Europe’s elite

They had their chances and gave it a good go, but with Barcelona only two games into pre-season, and United into their fifth, this half fit Spanish side edged United, highlighting that Mourinho’s men as still a little way behind Europe’s elite.

For me, United don’t have enough quality options in key positions, such as at left back, centre midfield, and up front.

Of course it’s only pre-season, and Jose Mourinho will claim its only a training session and he isn’t bothered about results, but he will surely use this performance to highlight to Ed Woodward that his team need reinforcements.

Did you watch the game? What did you notice? Where do United need to strengthen? Will Neymar stay at Barca? Leave us a comment