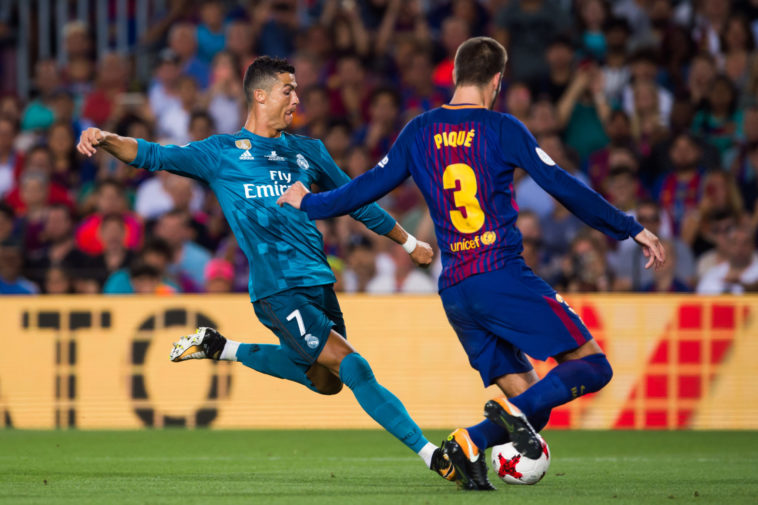 Real Madrid win the first leg of the Spanish Super Cup with a dominant performance against Barcelona. Here’s a look back at the hot tempered game filled with controversial decisions.

Any ‘Super Cup’ is considered to be a sort of season opener with not much on the line. But when the match is an El Clasico, the stakes are much higher. This game had all the ingredients of a Clasico, great goals, fights, and controversial decisions.

Croatian midfielder Mateo Kovacic had an early chance after Barca goalkeeper Ter Stegen’s awkward clearance came right to him. The Catalans had a couple of chances of themselves too, with Suarez testing Keylor Navas and a Messi free-kick, which missed the goal narrowly.

Ter Stegen made up for his error after a good save to deny Gareth Bale.

Real went ahead right after the break when Gerard Pique scored from a Marcelo cross, into his own net. The goal had a comic aspect to it due to the finish and also the Madridistas perception of Pique.

The game came to life as Dani Carvajal had an effort cleared off the line before Raphael Varane almost scored an own goal identical to Pique’s.

Cristiano Ronaldo replaced Benzema soon after and was greeted by boos every time he touched the ball. The jeering did not affect his performance though, as he scored a spectacular goal from 20 yards, the product of a swift Real counter. Ronaldo’s celebration, avenging Messi’s one at the Bernabeu last season, got him booked, and eventually sent off.

Just after his goal, Ronaldo was sent off for going down in the box after bring pressurised by Samuel Umtiti. He further displayed his displeasure by pushing the referee, a move which handed him a 5 match ban.

Marco Asensio, Real’s most promising talent, capped off another trademark Real counter attack with a beautiful left-footed strike into the top corner.

This means that Real head into the second leg with a two goal cushion, but without their star player, Cristiano Ronaldo.