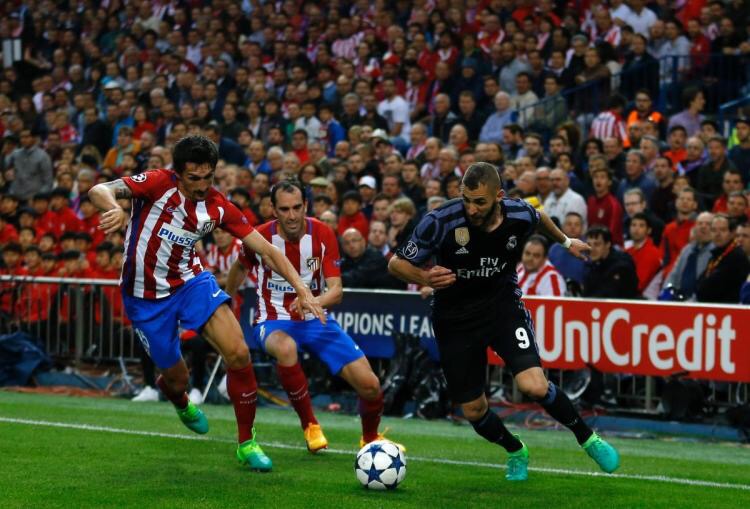 Real Madrid move forward in their Champions League title defence after seeing off Atletico, despite losing the second leg 2-1.

Los Rojiblancos went hunting for a goal right from kick off, inviting a few saves from Keylor Navas.

The attacking football worked out for Atleti, who managed to score two goals inside 16 minutes. Saul Niguez scored from a Koke corner, just 3 minutes before Antoine Griezmann converted a penalty.

Atletico’s explosive start led many to think that the unthinkable was indeed happening.

At 2-0 down, Real took control of the game, slowing down the pace and dictating possession.

The first half itself saw as many as five yellow cards being dished out. Danilo being the first to be booked for a high boot. Stefan Savic being the next one in the ref’s book just two minutes later. Later on, Sergio Ramos and Gabi got booked for dissent.

Real’s possession based football paid off in the 42nd minute, after a spectacular Karim Benzema dribble found Isco, who scored from close range.

Los Blancos looked comfortable, with the Real midfield dictating the tempo of the match.

A fine display of skill from Isco set up a promising Real attack early in the second half. A wayward Ronaldo strike meant it would bear no fruit.

Real Madrid had the ball in the back of the net again, after Ronaldo tapped in Modric’s volley, only for it to be judged offside. Real came close again, with Benzema hitting the side-netting from a Marcelo cross.

Despite not being as intense in their attack as the first half, Atleti kept on trying to bring the game to life. Keylor Navas made a heroic double-save, first denying Yannick Carrasco’s shot seconds before scrambling up to turn Kevin Gameiro’s rebound wide.

Atleti’s late push was nowhere near enough to change the result, meaning they missed out on another Champions League final. While Real look set to retain their title in Cardiff.

Real Madrid will play their third Champions League final in four years, and will be looking to defend their title against a phenomenal Juventus side in Cardiff. Real also are in pole position to lift the La Liga title with three games left to play.

Atletico Madrid have suffered heartbreak from their city rivals in the Champions League for the past four years. Losing in the final twice, once in the semis and once in the quarters. Atletico have pretty much secured Champions League next season and will look to avenge Real