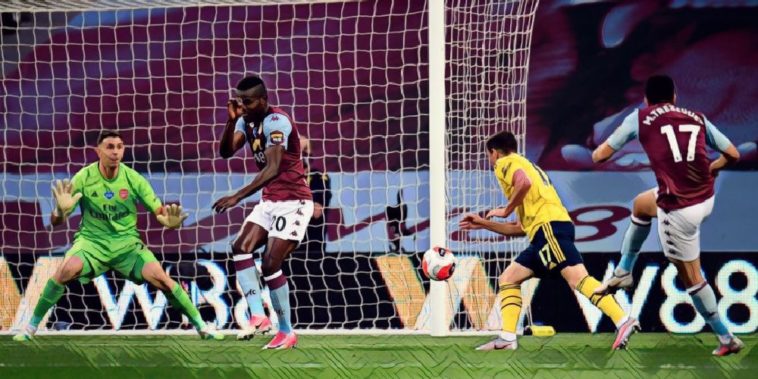 After the high’s of reaching the FA Cup final at the weekend, Arsenal were unable to break down a relegation-threatened Aston Villa, Mikel Arteta’s side losing 1-0 to confirm the Gunners worst league campaign in 25 years.

Arsenal dominated the opening exchanges without really threatening Pepe Reina in the Villa goal, and fell behind in all too familiar circumstances from a set-piece.

The Gunners failed to deal with a Conor Hourihane corner, Tyrone Mings’ near post flick-on dropping to an unmarked Trezeguet, who continued his timely run of goalscoring form by smashing a venomous volley beyond Emiliano Martinez in the 27th minute, his third goal in three games.

46% – 46% of the 46 @premierleague goals Arsenal have conceded this season have come via set-piece situations (21), the highest such ratio in the division. Problematic. #AVLARS pic.twitter.com/8edGNGufbh

Having earned lavish praise for their astute defending in their FA Cup semi-final win over Man City at the weekend, Mikel Arteta stuck with a back three, though after some nervy passages of play at the back in the opening exchanges of the second half, the Spaniard brought off David Luiz to revert to a back four, a move which initially saw his side regain more control on the game,

However, they were unable to make the breakthrough against a side who have struggled with their own defensive issues, and with 15 minutes to play, Aston Villa should arguably have doubled their lead. Jack Grealish led a quick breakaway down the left flank before the Villa captain played in Keinan Davies, though the second-half substitute fluffed his lines to drag the ball wide of the right-hand upright.

Eddie Nketiah saw a header come back off the post, while John McGinn hit a thunderous strike straight towards Arsenal ‘keeper Martinez as both sides went in search of a goal, though Villa hung on to secure a vital three points.

Speaking after the game, Mikel Arteta suggested that his side lacked freshness following their weekend Wembley exertions, admitting his side didn’t provide enough cutting edge and creativity to break down their opponents

“Villa gave absolutely everything and perhaps we lacked a little bit of freshness,” the Spaniard told Sky Sports.

“Congratulations to Villa because they were put under a lot of pressure and they managed to win the game. We were in some really good positions but we didn’t manage to deliver the ball.

“Emotionally and physically it’s been a very demanding week but I saw a team whio wanted to fight until the end. I’m not disappointed about the attitude – I know where we are in certain areas and where we need to improve more. We will get that.”

The result leaves Arsenal in 10th, and confirmed that it is their worst campaign since 1994/95, with eighth the highest they can finish: “It tells you the gap doesn’t lie. We have to make that smaller and smaller,” Arteta said when asked about the challenge facing him.

Meanwhile, a plane trailing a ‘Back Arteta, Kroenke Out’ banner was spotted circling Villa Park as Arsenal fans vented their frustration against the club’s American owner, though Arteta insists he has the full backing of the club hierarchy.

Another day, another plane ✈︎

“The Kroenke’s and the board and the sporting director, I have their full backing. I have that 100% – the fans have to believe what I’m saying.”

Arsenal face Watford on Sunday while Aston Villa travel to face West Ham in the final games of the season.