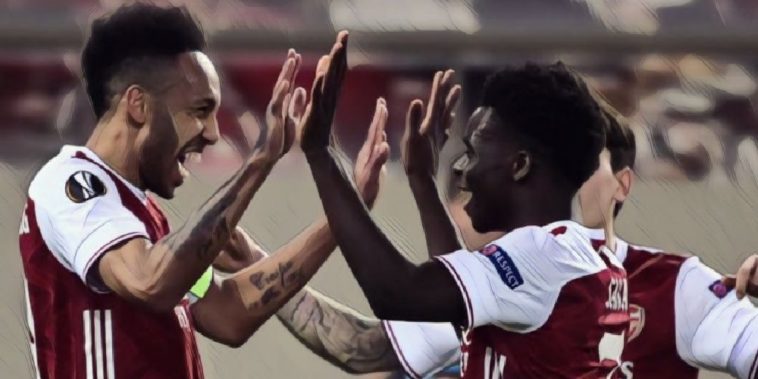 Arsenal left it late as they beat Benfica 4-3 on aggregate in Athens to secure their place in the Europa League last 16.

After their 1-1 draw in Budapest last week, Arsenal took the lead on the night and in the tie midway through the first half, Bukayo Saka playing a delightful ball through the Benfica backline into Pierre-Emerick Aubameyang, the Gabon international perfectly timing his run before lifting the ball over Benfica ‘keeper, Helton.

Mikel Arteta’s side looked to be controlling the game, though a needless challenge 25 yards from goal by Dani Caballos presented Benfica with a chance to finally test Bernd Leno. Diogo Goncalves stepped up, and expertly dispatched a curling free-kick into the top corner beyond the reach of the German.

With the scores all square, the advantage took a huge swing firmly in the favour of the Portuguese side, Helton collecting an Arsenal corner before launching the ball down the field. Having given away the free-kick for Benfica’s equaliser, Ceballos produced a dreadful backwards header which was read by Rafa, the forward racing towards goal, taking a touch to get past Leno before tapping the ball home from close range.

The Gunners would, however, level the scores six minutes later, as substitute Willian made an instant impact. The Brazilian found himself free down the left flank before pulling it back for Kieran Tierney, the former Celtic left-back setting himself before drilling his effort into the corner.

With the scores tied at 3-3 on aggregate, it looked as though Arsenal’s European adventure would be over at the first knockout hurdle, with Benfica holding the advantage on away goals. However, with just three minutes to play, Saka and Aubameyang again combined to send the north London club into the last 16. The youngster floated a lovely ball into the back post, the ball being met by the 31-year-old who headed home.

🔴⚪️🙌🏻👏🏼⚽️ This is football and you can always learn and make up for your errors! 💪 Up to the next round! Thank goodness😅! Let's go Gunners! Thanks @Aubameyang7 ❤️@Arsenal #EuropaLeague #VamosGunners #NextRound #ArsenalVsBenfica pic.twitter.com/VLbg0JCR6x

Speaking afterwards, Mikel Arteta hopes the result will have a positive impact on the club’s Premier League fortunes, saying it would have been ‘really harsh’ on his side to have been knocked out.

“Well certainly it keeps the season going in a much better way,” he said at his post-match press conference. “This competition is going to help [us in] the Premier League for sure, to maintain everybody together, to have something to play for.

“Today it would have been really harsh with what has happened in the two legs to be out of the competition.”

Asked about Ceballos’ part in Benfica’s two goals, Arteta added: “I’m especially happy for Dani because he’s a player that lives this profession like it’s the most important thing in his life and when he made that mistake if that would have cost the team to be out of the competition it would have been mentally really tough. So, that’s when you need players in the team like we have like with Auba with Bukayo creating the situations, with KT scoring the goal to save him. Out of a difficult situation created a really bright moment.

“He really lost this game & he did everything to be prepared. He doesn’t have a 10 year contract at the club, he’s on loan & still defends this club in the best possible way. I feel someone like him deserves good things happen to him.”

There has been criticism of goalscorer Aubameyang in recent months following his uncharacteristic struggles in front of goal, though the Spaniard says he has full confidence in his number 14 following his decisive contribution.

“I completely trust him because we’re producing the chances and you know when Auba has chances he’s going to score goals.”

Next up for Arsenal is a weekend clash against top-four hopefuls, Leicester City.