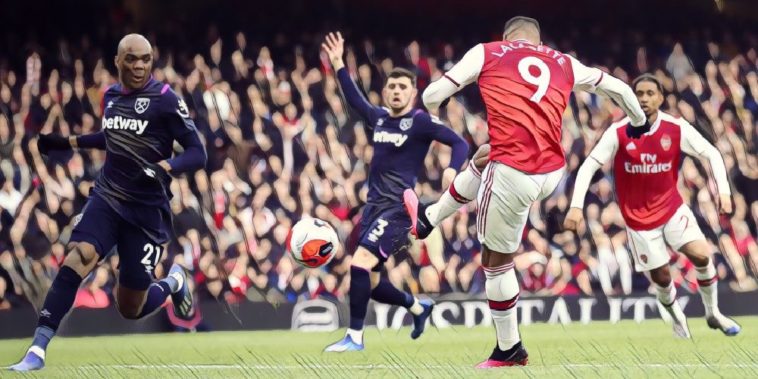 Mikel Arteta was pleased Arsenal managed to ‘find a way’ to a win in their London derby against West Ham, Alexandre Lacazette netting the only goal of the game in the second half.

Coming into the game in 10th, Arsenal have plenty of work to do in order to salvage any hopes of playing Champions League football, and for long spells of the match, it looked as though they would drop points for the fifth time in their last seven league games.

West Ham had a number of chances to open the scoring, Jarrod Bowen cracking the post early on, while Michail Antonio stabbed the ball wide from less than six yards.

However, the Gunners would claim all three points thanks to an Alexandre Lacazette strike, the Frenchman finishing smartly after Mesut Ozil’s headed knockdown, though fans at the Emirates would have to wait an eternity for the goal to be given after it was initially ruled out for offside.

Asked about his side grinding out a result, Gunners boss Arteta was pleased to see his side were able to ‘find a way’.

“Absolutely, there are days you have to find a way and that’s what big teams do,” Arteta told Premier League Productions. “When they find opportunities they need individual action – whether it be from the goalkeeper, defender to put a clean sheet on, they do it, and today we find a way and we won the three points.”

While Arsenal dominated possession (69%), it was West Ham who had the lions share of chances at the Emirates, with Lacazette’s winner being just one of two attempts that the Gunners managed to get on target.

“They had moments, they did really well,” Arteta said of the Hammers. “The gameplan worked for them. They were waiting really deep for us to give the ball away and exploit the spaces. I think we lost a lot of unnecessary balls which put ourselves in trouble big time.

“After that, we started to control the game a little bit better without generating a big amount of chances, but they are a threat and credit to them because I think they were good.”

Lacazette’s winner came 19 minutes after he had been introduced from the bench, the Frenchman having seemingly slipped behind Eddie Nketiah in the pecking order in recent weeks, and Arteta admitted it is a welcome selection headache.

“Absolutely. Ideally you have that all through the team, that’s the perfect scenario. Both Eddie [Nketiah] and him are working really hard, they are scoring, so it’s a good problem to have.”

Arsenal are now just five points behind fourth-placed Chelsea, who face Everton on Sunday, though Arteta is only focussing on seeing his side improve.

“Achievable [target] is that we have margin to improve, that we should take that margin as quickly as possible, perform better throughout 90 minutes and go day by day, and game by game.”