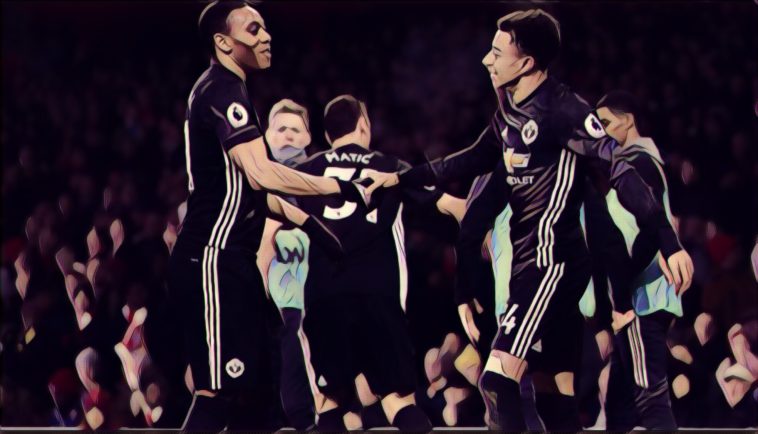 Manchester United beat Arsenal 3-1 in a breath taking encounter at The Emirates this evening, to keep up the pressure on Man City at the top of the Premier League table. In all honesty, both teams played brilliantly, and this will go down as one of the games of the season.

No chance for any of the goals, but probably past the stage on his career when he is able to make match-winning saves, like his opposite number did today.

A disaster. The Gunners captain was at fault for two of United’s three goals.

At fault for United’s second, and then went off injured straight after.

Mourinho tried to target Arsenal’s smallest centre-back, but the Spaniard stood up to the challenge well.

Covered a huge amount of ground down the right flank.

Worked tirelessly and provided a sublime assist for Lacazette’s goal.

Passed the ball well at times, but still looks a bit out of place against other top-six sides.

Put in his usual solid shift in defence, and got forward at every opportunity.

Excellent, without ever quite being able to make that decisive contribution.

Well marshalled for the most part by Lindelof, but did play a beautiful ball into the box for Lacazette’s goal.

A surprise starter after his midweek injury. Great movement, and took his goal well.

On after 15 minutes, and got himself into loads of dangerous positions, needs to be more clinical in front of goal however.

Caused United plenty of problems late on, and was denied a decent shout for a penalty.

Just did get the type of service he needed to make an impact.

A world-class display by the best goalkeeper in the world.

Solid as always, and opened the scoring with a tidy finish.

Is growing in stature, and handled Sanchez really well for the most part.

Another top-class display in attack and defence.

Was playing well, and had two assists to his name, but then his rash challenge on Bellerin almost cost his side the game.

A rock. So important to this United team, brings that extra bit of big-game experience to the table, that some of his team-mates are missing.

Followed on from his superb solo goal against Watford, with a match-winning brace.

Still no goal, although his all-round game was decent.