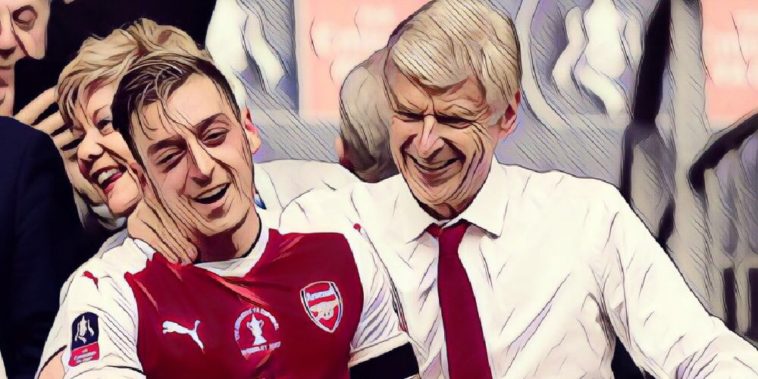 Mesut Ozil has said that he is thankful that he had the chance to work with Arsene Wenger and hopes the former Arsenal boss takes up a role in football management again.

Ozil teamed up with Arsene Wenger at Arsenal in 2013, making the £42 million move from Real Madrid. In his time in the Premier League, the German playmaker has been one of the most creative players, nothing up and impressive 51 assists, as well as scoring 30 top flight goals.

While he is often criticised for his lack of work rate, the 30-year-old was at his sparkling best in the Gunners’ last outing, the 3-1 win over Leicester City on Monday, a game in which the playmaker scored a sublime equalising goal.

Following that game, the Arsenal number 10 decided to conduct a Q&A session on social media, and he revealed that he was ‘thankful’ to have had the chance to play under the guidance of Arsene Wenger, and hopes to see him in the dugout once more.

“He always protected and supported me the best way he could,” Ozil said told his twitter followers.

“I’m very thankful he was my coach. Would love to see him as a club manager again.”

Wenger has recently said that he is close to making a return to football, although it is unknown as to whether that will be on the sidelines or at a more senior level in the boardroom somewhere, although he has been linked as a potential candidate to manage Real Madrid.