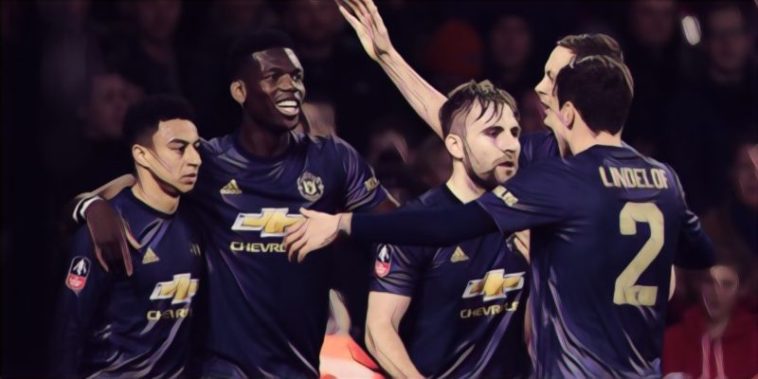 Manchester United continued their sensational form under Ole Gunnar Solskjaer by beating Arsenal 3-1 at the Emirates tonight to progress to the fifth round of the FA Cup.

Unai Emery’s Gunners side dominated possession throughout, but United tore Arsenal’s injury-ravaged defence to shreds on the counter-attack to make it eight wins from eight for Solskjaer since taking over from Jose Mourinho just before Christmas. Let’s see how the players rated…

A true legend of the Premier League, but tonight seemed to vindicate his decision to retire at the end of the season. The 36-year-old really should have done better with two of the three goals he conceded.

Did a fine job of shackling former teammate Alexis Sanchez for the most part and got forward whenever given the chance.

Forced off after 20 minutes following an awkward looking landing on his ankle.

Not the most convincing of displays from the Arsenal skipper and his night got even worse when he took the full force of Romelu Lukaku’s boot to the face – unsurprisingly the France international was unable to continue.

Did well going forward, but in doing so he left space in behind – space which United exploited time and time again.

The Uruguayan’s early season form has faded somewhat and didn’t affect the game as much as we have come to expect.

Gave a fine exhibition of safe passing. Had to fill in at centre-back after Koscielny went off where his lack of pace was inevitably exposed.

Arsenal’s best player, putting in a display packed with energy and creativity, making a mockery of Phil Neville’s pre-match claims that he is a luxury player.

Got himself a poachers goal, but apart from that, he struggled to find much space in which to operate.

Started brightly during the opening exchanges, before fading and making way for Ozil.

Put in a huge shift in terms of work-rate, harrying and hassling throughout. However, he just wasn’t able to find the type of clear cut chance he craved.

Rarely convinces and tonight was no different.

Brought some much-needed energy to the Gunners midfield and wasn’t afraid to stick his foot in.

Came on and looked like he was playing a keep-ball session the day after a game, such was his lack of intensity.

No chance with Arsenal’s goal and made one crucial save from a Ramsey header just after half-time.

Looked a bit off the pace during the opening exchanges, but fought his way back into the game and all in all another solid shift from the veteran.

Restricted Aubameyang and Lacazette to barely any clear cut chances, although his casualness on the must-have worried his own fans at times.

By no means the finished article, but is growing in stature and put in another encouraging display tonight.

Solid defensively and played a crucial role in United’s second goal, bursting out from the back and playing Lukaku through.

Snapped at ankles and kept things ticking over in possession – exactly as his manager would have wanted.

Grew into the game and used his experience to slow things down at times when Arsenal seemed to be building up a head of steam.

Superb during the second period, with his lung-busting runs driving his side forward time and time again.

Tidy finish for his goal and once again impressed in a false nine role away to a top six rival.

Enjoyed himself in an unfamiliar role on the right wing, providing two assists, with his through ball for Sanchez’s strike showing a deftness of touch that is rarely associated with the Belgian striker.

Silenced the boo boys with an excellent finish, even if he did little else.

It was his composed finish in the 82nd minute that sealed the victory for his side.

His pace caused Arsenal all sorts of problems after his introduction.