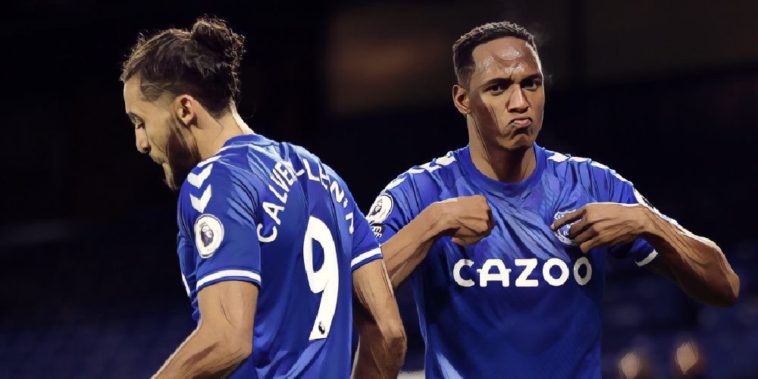 Arsenal host Everton on Friday evening, the visitors still with an outside chance of securing European football next season.

Here’s all you need to know about that Premier League meeting at the Emirates:

Amid all the fury surrounding the ‘Big Six’ club’s involvement in the proposed European Super League, the reaction to Arsenal‘s inclusion was one of mockery, as the footballing world questioned why a side who hadn’t been in the Champions League since the 2016/17 season were involved at all.

That was only reinforced by the fact that the Gunners were forced to rely on a 97th-minute Eddie Nketiah strike to snatch a point against relegation strugglers Fulham, the Cottagers having taken the lead midway through the second-half courtesy of a Josh Maja penalty.

After having performed so well against both Sheffield United and in the second-leg win over Slavia Prague in the Europa League, that limp display against Scott Parker’s side was symptomatic of their entire season, as they once again showed just how inconsistent they can be.

In Mikel Arteta’s defence, the Spaniard had rotated his side for Sunday’s game, with the focus now primarily on their Europa League campaign, the semi-final first leg set to take place next Thursday with the Gunners set to face Unai Emery’s in-form Villarreal side.

One potential concern for that clash with the La Liga side, as well as this weekend’s meeting with Everton, is the fitness of forward Alexandre Lacazette, the Frenchman having been forced off with a hamstring issue during the draw with Fulham and is set to miss Friday’s game at least.

With fellow forward Pierre-Emerick Aubameyang also currently sidelined Malaria, it could well open the door to Sunday’s hero Eddie Nketiah for a place in the side. Meanwhile, January loan signing Martin Odegaard is a doubt for the visit of Carlo Ancelotti’s side.

After having been firmly in the race for a top four spot earlier this season, the Toffees have just faded away in recent weeks, with injuries having played havoc with their Champions League hopes.

Their most recent entertaining draw with Arsenal’s north London rivals Tottenham means that they have now failed to win their last five Premier League games, their longest winless run in the competition since under Marco Silva back in December 2018.

In truth, Ancelotti’s men should have left Goodison Park on Friday night with all three points, having been the better side against Spurs, yet were left ruing a handful of defensive lapses from both Mason Holgate and Michael Keane that allowed the lethal Harry Kane to pounce.

Although it may well be viewed as two points dropped considering their performance, Everton will perhaps take heart from their strong display, despite still being without the likes of Dominic Calvert-Lewin, Andre Gomes and Abdoulaye Doucoure.

One man who has stepped up in their absence is Gylfi Sigurdsson, the Icelandic midfielder netting a brace against his former club to rubber-stamp his continued importance to the Merseyside club, despite having been on the fringes earlier on in the campaign.

As for Friday night’s clash, Ancelotti revealed that Gomes and Calvert-Lewin, as well as Yerry Mina, Bernard and Fabian Delph, are all fit and available.

The two sides last meeting came amid a typically hectic Christmas period, the Toffees taking the spoils after an action-packed first half.

The hosts had started the season in fine form and took the lead through a Rob Holding own goal, Dominic Calvert-Lewin’s glancing header having deflected off the stand-in Arsenal skipper.

The Gunners then drew level just over ten minutes later after Nicolas Pepe converted from the penalty spot before Yerry Mina regained his side’s advantage with a powerful header on the stroke of half-time.

With a David Luiz header one of few notable moments in a much quieter second period, the home side would hold on to claim all three points and move into second in the table.