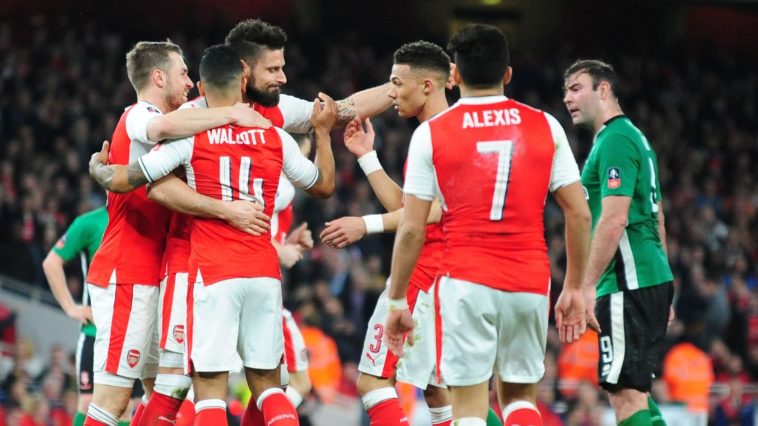 Arsenal won 5-0 against non-league side Lincoln City to book their place in the semi-finals of the FA Cup.

Lincoln City were not intimidated by their surroundings or the Premier League team they faced. The non-league side pressed high up the pitch against Arsenal and made their presence felt.

Arsenal’s first real chance of the game came in the 10th minute when Hector Bellerin found Aaron Ramsey but the Welshman fired well wide. Minutes later Theo Walcott nearly made it 1-0 but Lincoln City keeper Paul Farman pushed his effort onto the post.

Despite those chances, Arsenal were clearly lacking in confidence after their recent defeats against Liverpool and Bayern Munich. Arsenal had to make a change in the 27th minute as Alex Oxlade-Chamberlain went off injured. He was replaced by Mesut Ozil.

Lincoln had a fantastic chance to get off to a dream start. Nathan Arnold skipped past Laurent Koscielny but, fortunately for the Gunners, Petr Cech made a great save.

The Imps carried themselves very well in the first half but after 45 minutes the score was 1-0. There was six minutes added on at the end of the first half and Walcott fired home, thanks to a deflection, to give Arsenal the lead after a one-two with Kieran Gibbs. The England international has now scored in three successive FA Cup matches for the Gunners. Arsenal were not at their best but they got the goal they desperately needed at a crucial moment.

Danny Cowley’s side may have been disheartened to go a goal down but they were determined to come out fighting in the second half.

Arsenal made a much better start to the second 45 minutes. After some slick one-twos in the box, Oliver Giroud applied the finishing touch to double Arsenal’s lead.

Lincoln made their first change after Arsenal’s second goal with Jonny Margetts coming on for Jack Muldoon.

Then, in the 58th minute, Luke Waterfall was unlucky when he deflected Gibbs’ cross past Farman, into his own net to gift Arsenal their third goal of the match.

Granit Xhaka was substituted for Francis Coquelin in the 61st minute, a decision that was probably influenced by the fact Xhaka had received a yellow card in the first half.

Lucas Perez came on for Olivier Giroud four minutes later which was Arsenal’s final change of the match.

The Imps followed this up with a change of their own as Joe Ward came on for Matt Rhead. Despite their best efforts, Lincoln’s energy began to wane. They were chasing the ball and trying to maintain possession with little success.

Alexis Sanchez’s right footed effort in the 73rd minute made it 4-0 to Arsenal. Sanchez turned provider a few minutes later as his cross was tapped in by Ramsey.

Adam Marriott came on for Terry Hawkridge in Lincoln’s final substitution. Lincon then had two chances in quick succession. Marriott went close with a free-kick from 25 yards and Alan Power’s dipping strike forced Cech to spring to his left and maintain his clean sheet.

Sanchez had a chance to score Arsenal’s sixth goal but a Farman save and the woodwork did enough to deny him.

The match finished 5-0 to Arsenal. The Gunners only got going in the second half but once they did, they overpowered Lincoln and didn’t look back. The next time Arsenal play in the FA Cup, it will be at Wembley.

Lincoln can be very proud of their performance. They made the match difficult for Arsenal and are the first non-league side to reach the FA Cup quarter-finals since 1914. The fairytale is over but it will live long in the memory of football fans.