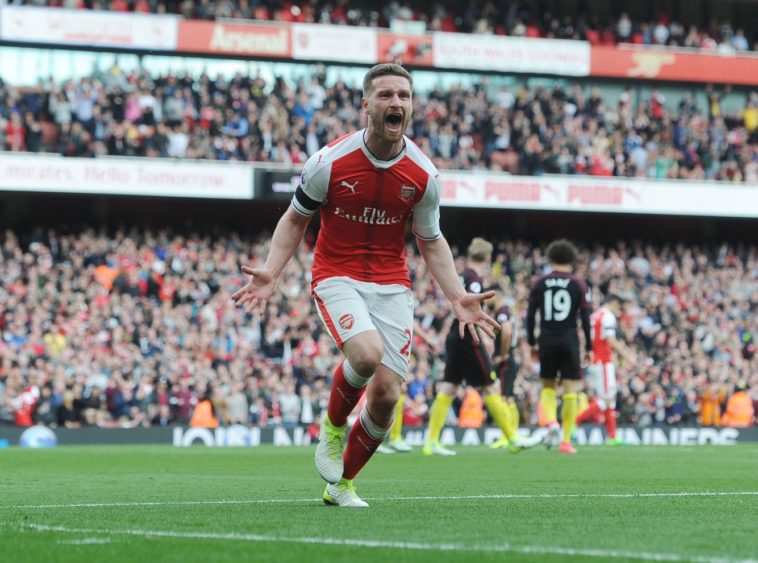 Arsenal and Manchester City played out a 2-2 draw at the Emirates in a game where both sides needed three points.

In a must-win game, Manchester City were the team more determined to get the three points.

Just five minutes had been played when they broke the deadlock. Leroy Sane latched onto Kevin De Bruyne’s long range pass and rounded David Ospina to slot into an empty net for a calm and composed finish. It is not often that Hector Bellerin is done for pace but he was unable to stop Sane scoring.

Man City continued to pressure Arsenal and could have doubled their lead. De Bruyne’s powerful drive crashed against the post and Ospina was equal to the follow-up from David Silva.

Arsenal finally started to grow into the game and could have equalised but Mesut Ozil’s shot, on the turn, was straight at Willy Cabellero. Man City were struggling to create as many chances as they did earlier in the game.

Arsenal got themselves back into it thanks to Theo Walcott who stabbed home after sloppy defending from Gael Clichy. A very scrappy goal from the home side but just what they needed.

The Gunners had barely finished celebrating when Man City regained the lead. Sergio Aguero was afforded far too much space in the box and smashed it into the back of the net. Walcott had a golden opportunity to bring Arsenal level again just before half-time after Alexis Sanchez picked him out but his volley was just over.

Both teams made substitutions at half-time. For Arsenal, Laurent Koscielny went off with an Achilles tendon injury and Gabriel replaced him. For Man City, Raheem Sterling went off and Yaya Toure replaced him.

The start to the second half was just as frenetic as the first. Shkodran Mustafi scored Arsenal’s second equaliser. He rose high above Man City defenders to head home from Ozil’s corner. For once it wasn’t Arsenal who were defensively poor from a corner.

Fernandinho’s drive was forced wide by Ospina as Man City tried to take the lead for the third time.

Walcott was withdrawn in the 67th minute and replaced by Olivier Giroud who went up front with Danny Welbeck moving to the right. Both sides seemed to slow down as the match continued with chances few and far between. The urgency had gone out of the game. Arsenal made their final substitution as Danny Welbeck came off and was replaced by Alex Iwobi.

Arsenal and Man City were settling for the point as the game came to an end. David Silva was replaced by Pablo Zabaleta with two minutes remaining.

The points were shared in North London, a result that didn’t benefit either team. Arsenal fought back twice to scrape a point and Manchester City could and probably should have taken all three. Pep Guardiola’s men are one point behind Liverpool in fourth and face Chelsea in a crucial match on Wednesday.

After two 3-1 defeats, a draw is an improvement for Arsenal but still nowhere near good enough as they stay sixth in the table and seven points adrift of the all-important top four. Their next match is a London derby against West Ham, another side under pressure at the moment. Once again, that is a game they must win.