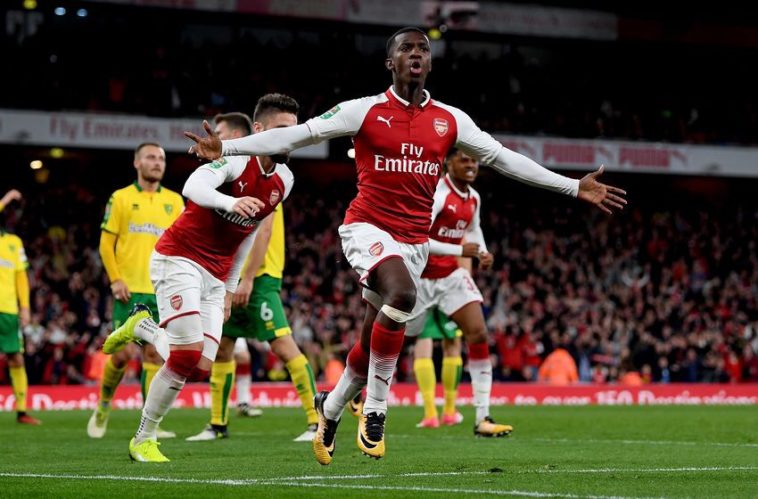 Arsenal relied on unknown youngster Eddie Nketiah to spare their blushes and progress to the fifth round of the Carabao Cup.

Arsenal versus Norwich at the Emirates should be fairly comfortable for Arsenal. Yes, they played only two days ago, and they played their second string squad, and, yes Norwich are sitting 6th in the Championship after a win in the old Farm Derby (the Ipswich match) on the weekend – but it’s Arsenal. Arsenal have never lost at home in the league cup to a lower opposition. But then again, it is Arsenal.

In typical Arsenal fashion they barely showed up in the first half. Credit shouldn’t be taken away from Norwich mind.

The first real chance was taken by Norwich’s Vrancic, he perhaps chose the wrong option in shooting opposed to playing in a team-mate but the warning signs were there. 21 year old Norwich keeper, Gunn had incredible reflexes to stop a Holding header from sneaking in. Not the only decent save he made, he also kept Walcott and Wilshere out later in the game too. A superb performance from the keeper, how did the rest of his team get on?

Well, Norwich looked dangerous every time they strung a few passes together, they were direct and aggressive. After a bit of a scrap in the middle of the park, the ball fell to Maddison who played in Murphy. Murphy neatly chipped the young Arsenal keeper, Macey, who may have vacated his net a little too late. 1-0 to the away side. To be honest Norwich were comfortable first half, Arsenal needed a lift in the second.

What we saw was a succession of chances for the canaries however, Oliviera was pulled down by Elneny when clean through on goal, the Egyptian was lucky to only pick up a yellow. Murphy played the ball along the line to Oliviera who was only denied by a decent Macey save. Murphy then chipped the kicker but unfortunately it was a little heavier than his opening goal. Vrancic sent Arsenal defenders the wrong way in the box and stunningly missed the target. Amazingly Arsenal were still only 1-0 down.

The Gunners never looked like scoring to me, until a substitution was made on 85 minutes. 18 year old academy graduate Eddie Nketiah came onto the pitch just as a corner was about to be taken and he scores with his first touch. The game went to extra time and it was really the subs game to play with.

In the first half of extra time the 18 year old headed in the net, from a corner again, scoring a brace on his home debut and effectively killing off the tie (the Norwich players were looking tired by this point). Cries of ‘Eddie’ rang around the stadium and when he used his pace to beat his defenders and play himself in on goal, everyone was praying it would hit the back of the net for his hat-trick, alas it did not happen. He ran the ball into the corner in a professional manner during the last moments of the tie and won a throw in. Real professional performance from the lad, the young players outshone the senior players on this night in general and it was wonderful. Some people write off these cup competitions, but they can produce magical moments, and at the Emirates last night they did.