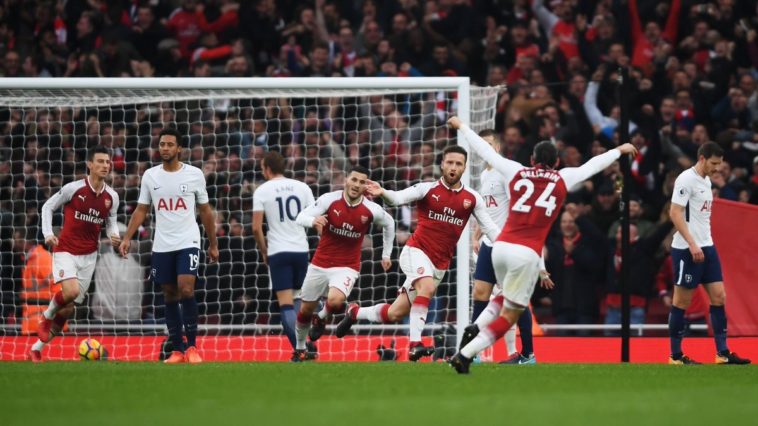 First-half strikes from Shkodran Mustafi and Alexis Sanchez were enough to give Arsenal a 2-0 win over local rivals Tottenham Hotspur in the North London Derby.

After two weeks of international football, the Premier League was back with a bang. Arsenal faced Tottenham Hotspur for the first North London derby of the season and it didn’t disappoint.

The derby, as expected, was lively from start to finish. Harry Kane, who has scored in all five of his Premier League appearances against Arsenal, fired a low drive at Petr Cech but it was easily saved.

Hector Bellerin put a superb cross into the six-yard box but Lacazette couldn’t get on the end of it. Arsenal were dominating the game without breaking the deadlock. Lacazette almost went through on goal but Hugo Lloris came rushing out and cleared the danger.

Denmark’s hat-trick hero Christian Eriksen very nearly gave Spurs the lead. He received the ball from Ben Davies and took a great touch before firing a low strike towards goal but his effort hit the post. Kane then had another chance but Cech held onto it once again.

Minutes later, Spurs were made to rue their missed opportunities. Shkodran Mustafi, back in the side after a groin injury, rose highest to head in Mesut Ozil’s free-kick and put Arsenal in front. Spurs were unable to recover and five minutes later, they found themselves two goals down.

Alexis Sanchez, who has not been having the best of seasons, was found by Lacazette and fired high into the roof of the net to double Arsenal’s advantage. It was very clinical finishing from the Gunners whose goals came from their only two shots on target in the first half.

Spurs attempted to get back into the game as the second half began but Arsenal were able to keep them at bay. Kane found space in the area and got a shot away but Mustafi was there to slide in and block the shot from hitting the back of the net.

Mauricio Pochettino’s side continued to pressure Arsenal as they searched for a way back into the game but Arsenal defended well to keep them at bay. The home side were pushing for a third goal but Sanchez’s shot flew over the crossbar.

Eric Dier had Tottenham’s best chance of the match with nine minutes remaining. He was free at the far post and headed powerfully across goal but somehow Cech made a sensational one-handed save to preserve Arsenal’s clean sheet.

Arsenal were the better side, deserved the three points and are now a point behind their rivals. They have now won 11 consecutive games at the Emirates, their longest winning run at the stadium.