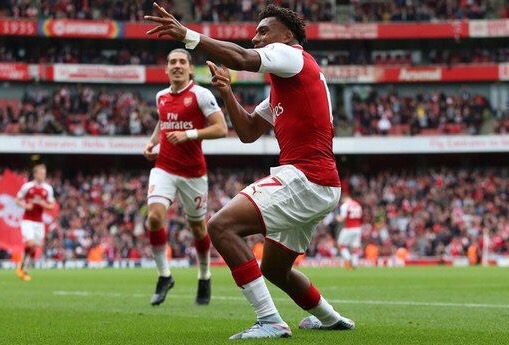 Arsenal beat Brighton 2-0 to move up to fifth in the table, level on points with reigning champions Chelsea.

Nacho Monreal’s strike in the first half and Alex Iwobi’s curler in the second was enough to give Arsenal a win over newly-promoted Brighton.

Arsenal were by far the better side from the first whistle. Alexandre Lacazette scored his first Arsenal goal within two minutes against Leicester City and he nearly repeated the trick against Brighton. His fierce volley from 25 yards hit the post to deny him his fifth Arsenal goal of the season.

After going a goal down, Brighton began to grow into the game. In the 25th minute it was their turn to hit the woodwork. An unnecessary foul from Sead Kolasinac gave Brighton a free-kick which was rolled to Solly March who smashed a shot against the post! Brighton were very unlucky not to be level.

Alexis Sanchez was having a good afternoon but it got even better when he produced a sublime assist for Arsenal’s second goal. The Chilean’s backheel found Alex Iwobi who curled his strike into the top corner with just under an hour gone. A typical Arsenal goal.

Arsenal need to be more clinical

The Gunners scored twice but it should have been more. Goal difference could be key this season and this is a match they should have won 4-0 at least. Brighton made plenty of mistakes and Arsenal should have capitalised on them.

Chris Hughton’s side created a few chances in the final few minutes of the game and could have got a goal back. Substitute Glenn Murray’s header hit the side netting and Brighton will feel they were unlucky not to stop Petr Cech getting another clean sheet.