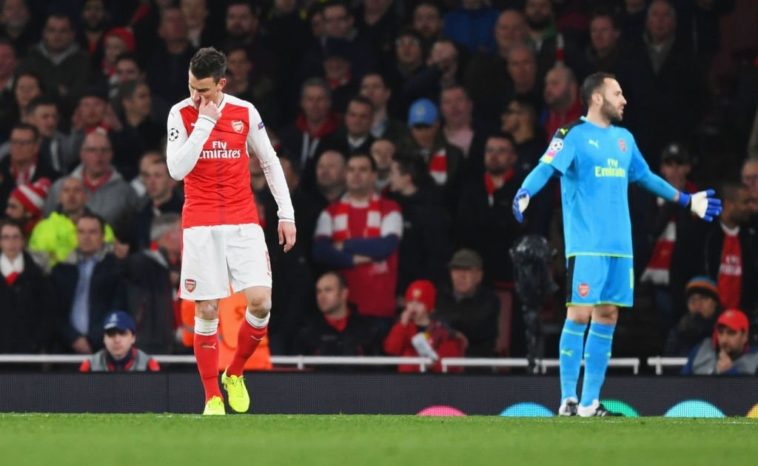 Arsenal were humiliated 5-1 (10-2 on aggregate) by Bayern Munich as they crashed out at the last 16 stage of the Champions League.

Bayern Munich dominated possession at the start of the game. Theo Walcott could have put Arsenal ahead in the opening 10 minutes but his first touch was not good enough and Manuel Neuer was quick to react and clear the danger.

Olivier Giroud got on the end of Alexis Sanchez’s cross but his header was inches wide. He was starting instead of Danny Welbeck who fell ill during the warm up.

Arsenal made the most of their promising start, and in the 20th minute Thero Walcott fired into the roof of the net after racing through on goal to give the Gunners a much-needed lead on the night. The England international has scored four goals in his last four Champions League games at the Emirates.

There was a strong penalty appeal for Arsenal in the 33rd minute when Walcott was fouled by a clumsy Xabi Alonso. However the referee waved away the protests.

Bayern Munich were not at their best in the first half and created just one clear chance.

Walcott and Alex Oxlade-Chamberlain were Arsenal’s best players in the first 45 minutes and at half-time they had a 1-0 lead.

They began the second half needing to score three more goals. Within four minutes Giroud had another chance to increase Arsenal’s lead. This time it was Aaron Ramsey’s cross that the French forward failed to connect properly with. Arsenal were not clinical enough and they were soon punished.

The tie was over once again in the 54th minute. Laurent Koscielny saw red for fouling Robert Lewandowski in the area. Lewandowski converted the penalty with ease to restore Bayern’s four-goal aggregate cushion. Arsenal were made to pay for not keeping the score down in the first leg. The Germans had once chance and made it count.

With Arsenal down to 10 men, and 6-2 down on aggregate, the Gunners switched off, leaving Bayern to run riot.

Former Chelsea winger Arjen Robben scored in the first leg, and soon after he grabbed a goal in this one. He made it 2-1 to Bayern in the 68th minute at the Emirates to finish the tie completely. Arsenal keeper David Ospina was partly at fault because he overplayed at the back and Robben took full advantage.

Just a few minutes after scoring his goal, Robben was substituted and replaced by Douglas Costa.

Arsenal made a triple substitution in the 72nd minute. Aaron Ramsey, Giroud and Sanchez came off. They were replaced by Francis Coquelin, Mesut Ozil and Lucas Perez.

Less than 10 minutes after coming on, Costa scored Bayern’s third goal with 12 minutes to go. Chilean midfielder then Arturo Vidal pounced on a mistake from Shkodran Mustafi to slot home to make it 4-1, before he scored his second goal of the game and completed Arsenal’s humiliation.

Just like the first leg, Arsenal conceded four goals after Laurent Koscielny went off. The Gunners started well but they could not maintain it. Munich did not have the best start and were far from convincing in the second half, but once they grew into the game, Arsenal didn’t stand a chance. Bayern Munich progressed to the quarter-finals barely bremaking a sweat. Arsenal are out of the Champions League at the last 16 stage – again.