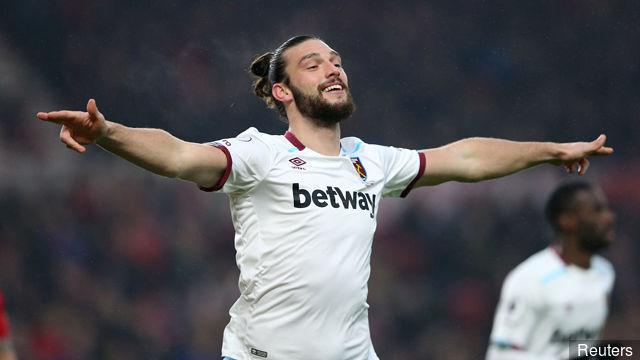 According to some newspaper reports this week, England Manager Gareth Southgate will be at the London Stadium on Saturday to watch West Ham United take on West Bromwich Albion to watch Andy Carroll. Has the Hammers’ striker Andy Carroll done enough to earn another England call-up?

Carroll’s form of late has been outstanding and since returning from injury in early December, he has scored six goals in just 12 Premier League matches. With a better minutes-per-goal ratio this season than the likes of Alexis Sanchez and Zlatan Ibrahimovic, the England manager should be impressed.

Southgate’s next squad selection will be for March, when England play Germany in a friendly and Lithuania in a World Cup qualifier. Another goal on Saturday and Carroll may well find himself back in an England squad for the first since 2012.

Carroll has nine caps for the Three Lions so far, although none of these have been awarded while he has been a West Ham player. His senior debut for his country came in 2010. He scored against Ghana in a friendly at Wembley in 2011, then against Sweden at the European Championship in 2012.

The goal he scored against Sweden was an archetypical centre forwards goal. He powered home a Steven Gerrard cross to give England an early lead in a game they went on to win 3-2.

His heading ability may well have given England some extra clout in last year’s European Championship when the team, especially against Iceland, looked toothless and unable to score

His prowess in the air and in particular from crosses have made him one of the country’s top centre forwards and when he is fit he can bully and terrorise the very best defences.

Therein lies the crux of the matter, Carroll is too often not fit, as a string of injuries have blighted every one of his five seasons at West Ham.

If he could have avoided any injuries during those seasons, Carroll may well have played more times for his country as his goal tally in the Premier League would have certainly been higher.

When he plays for the Hammers, he scores regularly and West Ham invariably play better.

If he were to get a call up once again, Carroll would certainly add a different dimension to the squad. He’s a totally different option to the likes of Harry Kane, Wayne Rooney, Marcus Rashford and Daniel Sturridge.

In an interview for the official West Ham United website, left back Aaron Cresswell, another player who will be out to impress Southgate on Saturday, said of Carroll:

He has been unlucky with injuries but we all hope he can stay fully fit now and get as many goals as he can for us.

He is going into every game believing he can score and for any striker it is all about confidence. When you have that mindset that no-one is going to stop you it can only bring the best out of him.

It is fantastic to see Andy when he has that belief and I really hope he can continue this.

West Ham supporters will agree. But the more games he plays the risk of injury increases and any extra matches for the national team will only compound the matter.

West Ham centre forwards, with the exception of Sir Geoff Hurst of course, have not had a particularly happy time with England squads. Dean Ashton for instance had to retire in 2010, aged only 26, having failed to recover from an ankle injury he initially picked up during an England training session.

Consequently, most fans would prefer Carroll to stay fit, score goals for West Ham and miss out on playing for England, at least for the time being.