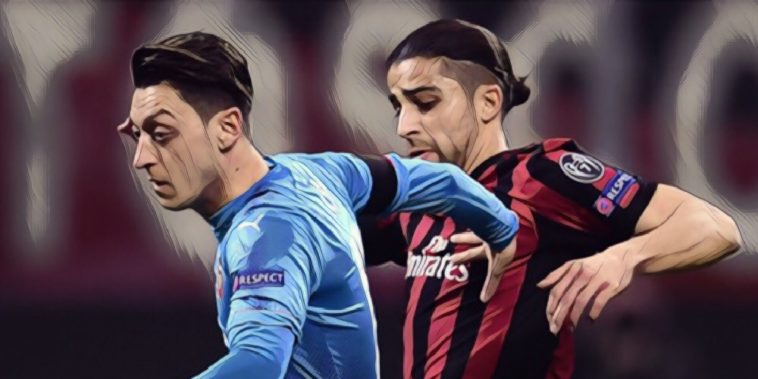 Arsenal defeated AC Milan and grabbed two away goals in the process at the San Siro to take a first leg advantage over their Europa League opponents. Here are five things we learned from the game.

With Pierre Emerick Aubameyang being ineligible and Alexandre Lacazette injured, Danny Welbeck remains the only choice for Arsene Wenger to start up front in the Europa League.

The former Man Utd man started up front for Arsenal and with the kind of performance Arsenal put in as well as the number of chances created, a better output was needed from Welbeck. However the England international failed to impress, highlighting why Arsenal need Lacazette back as quickly as possible.

The Frenchman is already ahead of his schedule returning from injury and looks to return in time for the next round, if Arsenal do qualify. Mkhitaryan, Özil and Wilshere will be eagerly waiting for the striker’s return.

Arsenal have a big game player

Over the years, Arsenal have been criticised of not having a big game player who would consistently perform in a big game. But now they do have one in Aaron Ramsey. The Welshman has had some important contributions in big games in the last few years for Arsenal. Ramsey has scored/assisted against Liverpool, Manchester City, Chelsea, Tottenham and some other big European clubs in the last few years.

Last night as well, against Milan, he managed to score Arsenal’s second and a really important goal that put Arsenal in a commanding position in the game.

Henrikh Mkhitaryan put up some spectacular individual performances to see United win the Europa League last season. And he looks to be in the mood to do the same this season as well. The midfielder had a brilliant first half that even saw him score Arsenal’s first goal. He will have a crucial role to play in this Arsenal team in the latter part of the competition. Most importantly, he is someone who has that experience that Arsenal will need at this point.

Big task ahead of Milan

Arsenal are a different team when they play at home. Travelling the Emirates with a two goal deficit and hoping to overturn that will be a hugely difficult task and AC Milan will have to be at their absolute best if they want to progress to the quarter finals.

The Italians were in great form coming into this game as well, being unbeaten in 13 games and having not conceded a goal at the San Siro for 529 minutes, but were completely outplayed by an out-of-form Arsenal. If AC Milan are to have any chance of getting into the next round, they will have to get a quick goal or two early into the game at the Emirates, which will certainly not be easy.

Finally some competition for Bellerin

Calum Chambers was called into the squad in place of the injured Hector Bellerin, who missed the game. The young English defender did very well and never looked really uncomfortable in a position he isn’t usually accustomed to. However, Chambers did play at right back for Arsenal a couple of seasons ago, and now with Mathieu Debuchy gone, he could challenge Bellerin for his place in the first team.

The Spaniard has not been in the greatest of form this season, will now have to up his game after looking at Chambers’ improvement in his position. Chambers, who spent last season on loan at Middlesbrough, has not really ever gotten a break at Arsenal and will be eyeing Bellerin’s spot.