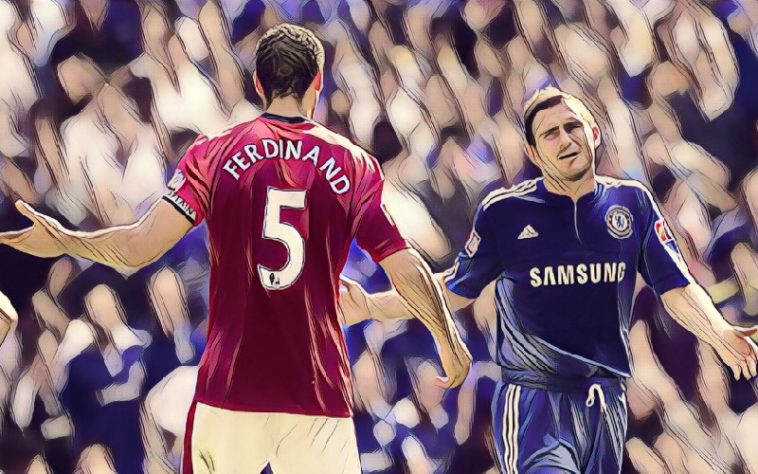 In a revealing interview featured in The Mirror, Rio Ferdinand has revealed that his desire to win was so intense, that it even cost him some very close friendships.

The former Manchester United and England defender was best friends with Frank Lampard growing up as kids but the intense club rivalry between United and Chelsea meant they stop talking to each other, despite having been inseparable as teenagers coming through the ranks at West Ham.

“We had a generation that were nicknamed the golden generation of players where expectations were huge for us a national team to go out and win something.

“And that there is what held us back. Not being able to separate club ties to international football.

“I wrote a chapter in my book about Frank Lampard. We grew up together at West Ham, then we went our separate ways.

“I wrote this chapter at the end of my career, before it went out, out of courtesy. I sent it to Frank and asked him if it was okay to include.

“He text me back saying if he had written a chapter on me, it would have been word for word. Exactly the same.

“We didn’t hate each other but I didn’t want to give him anything that he could take back to Chelsea.

“I just didn’t like him anymore really because he was playing for Chelsea. He was getting his hands on a trophy that I wanted. It was an obsession with winning.

“We grew apart and didn’t speak. But now we speak. He was at my birthday the other day.

“What sport can do to a personal relationship is nuts. Its mad. All for the obsession of winning.”

Interestingly, Ferdinand also admitted that it was an inability to forget club allegiances that ultimately cost England’s so called Golden Generation from ever achieving anything of note at major international tournaments.

The former best pals separation during their playing careers really didn’t do each other much harm however, with both of them going on to have glittering club careers winning numerous Premier Leagues, FA Cups and Champions Leagues, so maybe sacrificing their friendship was worth it after all.

Each of the former West Ham youth players retired in recent years as all-time Premier League greats and at least Rio invited Frank to his latest birthday party, and they can rekindle their bromance now their playing careers are well and truly over.