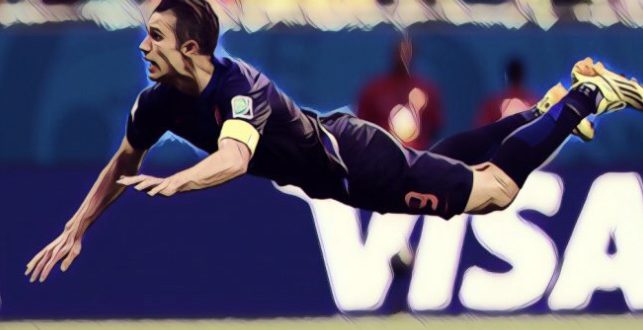 Robin van Persie scored 144 Premier League goals for Arsenal and Manchester United during his 10 year stay in England. In truth that figure would really have been a lot higher had it not been for persistent injury problems early in his career.

At his peak the Dutchman was head and shoulders above every other striker in the Premier League and he famously, almost single-handedly, won Sir Alex Ferguson his last Premier League title after his controversial transfer from Arsenal to Man United.

Van Persie moved to Turkish side Fenerbache after his time at Old Trafford came to an end, before moving back to his boyhood club Feyenoord. With the curtain set to come down on his incredible career today, here at The Football Faithful we have compiled his best ever goals.

A truly magnificent strike, which, like many of Van Persie’s best goals, displayed supreme levels of technical ability. Emmanual Eboue broke down the right flank and floated a pretty innocuous looking cross towards the edge of the Charlton box, cue Van Persie flying five feet into the air to smash a unstoppable volley past the hapless Charlton keeper. Now that lads, is what they call a Wonder Strike!

Probably the best of the Dutchman’s 50 goals for Manchester United, and a hugely significant one as well. This goal came as part of a superb hat-trick in a 3-0 win over Aston Villa at Old Trafford that clinched the 2012/13 Premier League title for United.

Rooney picked the ball up in midfield and played a beautiful, lofted through ball over the top of the Villa defence. Van Persie, as he so often did, had pulled off the shoulder of his marker and as the ball came down out of the sky he caught the ball flush on its sweet spot to bury a sensational volley past the Villa keeper. Only the best of the best would attempt this finish, let alone execute it to perfection.

Next up is a cracking free-kick by a very young looking Van Persie at Highbury. Van Persie lined the ball up from 30 yards and scraped a bit of mud off his boot before unleashing a wonderful effort that flew, curled and dipped its way into the Wigan net, leaving the keeper rooted to the spot.

Arsene Wenger once described Van Persie as the most efficient striker that he ever worked with. This goal kind of gives you an idea of what he was talking about. Samir Nasri played a long ball forward towards Van Persie who controlled the ball on his chest, turned and then smashed a right-footed finish into the back of the net, all in one beautiful efficient movement. Lethal!

Daley Blind played a ball in behind the Spanish defence from just inside his own half towards Van Persie, who, sensing that Iker Cassilas was coming towards the ball, dived full length in the air and placed a truly outstanding diving header over the Spanish keeper and into the back of the Spanish goal.

Check out our brand new Premier League Podcast – Subscribe on iTunes and never miss an episode!